HCC board members and CurlON board director Elaine Brimicombe presented Sinclair with the award during a club dinner for participants of the HCC’s Last Rock Bonspiel Nov. 26, an event with Sinclair’s hands all over it.

CurlON has 180 member clubs across the province.

“The award wants to recognize a curling volunteer who goes above and beyond,” CurlON’s Brimicombe told the curlers. “Curling wouldn’t exist without curling volunteers. This is for volunteers that go beyond the four walls of the club.”

HCC board member Murray Pearson nominated Sinclair for the award.

“I was thinking of a guy who is very quiet, very unassuming,” Pearson joked. “His name is Blake Sinclair. He makes the energizer bunny look like he’s asleep.”

Pearson, in his nominating letter, said Sinclair has had a huge impact on his community since joining the HCC board eight years ago.

“Blake has demonstrated initiative and leadership to advance his vision of a club dedicated to community service, one where members can enjoy a rewarding curling and social experience,” Pearson said. “Blake’s personality and commitment to service inspired members to become engaged in club activities, take on volunteer roles as league coordinators, board members and all the other many jobs done by volunteers. He promoted in-club Learn to Curl programs and community outreach programs to build awareness of HCC curling programs and ultimately, build our membership. Two of his major achievements have been the Last Rock bonspiel and the President’s Challenge Cup that have brought together experienced and new curlers from HCC and other clubs in a friendly competition.”

Sinclair was also a force behind the scenes.

“Under his guidance, the board has developed a clear understanding of the financial challenges it faces resulting in a 25-year financial plan to manage major expenditures,” Pearson said. “His vision and dedication to making our club a great place to play and socialize has given us the club we enjoy today.”

Pearson said, of all the tasks Sinclair took on, one of the most important was bringing the club together.

“His energy is hard to resist,” Pearson told the club last week. “He saw a club that was divided between the new players and the veterans. How do we bring it together? Blake had a vision of a social club that was all together.”

Sinclair said he didn’t plan on speaking – the award was a surprise to the past president.

“I’m not a guy who likes to talk a lot,” a slightly teary eyed Sinclair said to much laughter. “It’s about community and helping one another. We want to grow the club. We have a lot of amazing people who have helped make the club what it is.”

Board games in the Bay

All WC schools expected to be closed Feb. 21 due to labour unrest 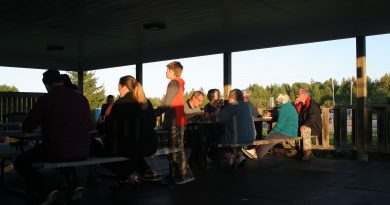