GALETTA – At 77-years-old, Galetta’s David Jefferies will be competing at the 2022 Canadian Lawn Bowling Championships Aug. 15 to 25 in Burlington, ON.

The Arnprior resident who raised his family in Galetta, is the current Galetta Community Association (GCA) president and the caretaker of Donald MacHardy Green – the Galetta Bowls lawn bowling club.

Jefferies, who picked up the sport the same year the Galetta Bowls club opened 35 years ago, has a storied history with the sport. This will be his sixth nationals, but his first as a single.

Jefferies qualified for nationals after coming in fifth at the provincial championship held in Kitchener, ON, on the July 9 weekend. The top six qualify for nationals and Jefferies came fifth out of 40 athletes.

““I was probably the oldest one there,” Jefferies said. “There were a couple of kids in their 20s, really hot up and comers. One made it and one didn’t. There’s a lot of young bowlers coming along, really good ones.”

Jefferies will head to Burlington to square off against 23 other top bowlers from across the country, and he is looking forward to the test.

“I am,” Jefferies said. “I want to see how I measure up to the best in Canada, and I really love to do well, so I’ve been out practicing and studying the techniques and strategies. When I won in Kitchener, there were some strategies I could have used, or did use, that could be better. How to set your bowl, what side to play. I’ve been reading a lot about it, so hopefully I’m learning how to be a better player.”

What he did learn at Kitchener is, smaller can be better. Jefferies, in an effort to conserve energy, switched out his own bowls for his wife’s set.

“I use size five bowls, which are quite huge,” Jefferies said. “I figured three days of bowling, I’m going to be pooped. So, I borrowed my wife’s, size two, and I bowled lights out with them. They’re a little narrower and a little lighter than mine. Easy to hold. I found them very good.”

Although the three days of bowling was still a physical test for the veteran lawn bowler.

“It got very windy the last day, and I think that’s why I lost one game,” he said. “The next game I think I was mentally tired, and I wasn’t concentrating. But by winning the morning game, I was guaranteed at least fifth.”

Games are 18 ends, and players are given two-and-a-half hours to complete a match.

This will be Jefferies sixth national championship, but first as a singles player.

Jefferies has competed in five other national championships in Edmonton, Fredericton, Montreal, Coburg, ON and Midland, ON.

He competed in three mixed pairs with his wife Sandra, twice in fours, and once in seniors.

He won a bronze with his wife roughly 12 years ago and a silver in the fours division.

“Those are my two big wins,” he said.

He also has a silver with his wife from a provincial championship.

“That was a highlight for me, coming in second in Ontario,” he said.

Galetta Bowls, although one of the area’s smaller clubs, boasts a very strong singles league which draws players from around the city. He says that league has been beneficial to him, and all who play in it.

“We have a singles league here, and I’m doing pretty good,” Jefferies said. “I’ve lost one game, to my wife, strategically. I’ve been bowling really well this year. Our singles league is probably the most competitive event in the district. So, we attract a lot of the better players. It’s good practice for me and everybody. We have new players this year and you can just see them blossoming.”

He says one thing he loves about lawn bowling is it is fun for all skill levels.

“It’s a step up,” Jefferies said of the upcoming Canadian championship. “Lawn bowling is wonderful. You can play it locally socially, and then if you aspire to do better you can go to tournaments at other clubs, and if you want to get more competitive you can play at something like this (the district qualifier going on in Galetta this past weekend) the winner of this goes to Coburg to play in the provincial championship.”

The Galetta club is 35 years old, built by farmer Don MacHardy who the green is named after, and that’s exactly when Jefferies started playing.

“I bowled from the beginning,” he said.

Roughly 20 years ago he was recruited to become the greens’ caretaker. The original field was built on soil, but Jefferies has slowly been substituting in more sand to improve the playing surface. Despite the recent weather, the extremely short grass was still very green.

“I do enjoy it,” Jefferies said of the caretaking. “I do the rink in the winter, it’s physically exhausting with the shovelling and scraping, but I keep in shape. Then I’m here five days a week, so I’m getting physical exercise, it’s a lot of hard work, and I’m getting tolerant of the sun because I’m out in it, so that helps me. I enjoy it.”

The singles portion of the Canadian Lawn Bowling Championships begins Aug. 22. You can track Jefferies progress at the official website here. 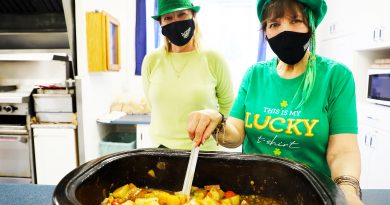 Legion: Heading in the right direction