WEST CARLETON — While things are stabilizing in the Mississippi Valley watershed, the conservation authority is still calling for severe flood levels in West Carleton.

“The Mississippi Valley Conservation Authority (MVCA) is issuing an update to the Flood Warning for the entire Mississippi River watershed issued April 21,” the MVCA released in a statement today (April 23). “Severe flood levels are expected be reached at numerous locations.”

Mississippi River, fed in part by Mississippi Lake, will be the recipient of the overflow of that growing body of water.

“Flows are expected to continue to increase through the week,” the MVCA said. “Elevations will vary due to the topography of the shoreline of the river. All residents along the river should keep a close watch on levels and take necessary precautions to protect their property.”

Levels in Mississippi Lake continued to climb through the weekend and are currently at 135.56 metres but are still expected to increase another 10 to 15 centimetres over the next 48 to 72 hours, matching levels experienced in the 1998 flood. Levels will remain high for at least a week before they begin to decline.

Meanwhile the Carp River has stabilized.

“Flows in these watersheds (including the Indian River) have dropped significantly over the last 48 hours,” the MVCA said. “No further updates will be issued for these watersheds.”

The City of Ottawa has modified its volunteer flood preparation effort changing the schedule to better reflect the end of the holiday weekend. In West Carleton, sandbagging efforts and the volunteer check-ins will continue at the NorthWind Wireless Fibe Centre, the Constance Bay community centre at 262 Len Purcell Dr.

Volunteer operations will now run from 3 to 7 p.m. from Tuesday to Friday.

“The Number One priority remains to be filling sandbags and supporting homeowners along the Ottawa River in danger of flooding,” Coun. Eli El-Chantiry released in a statement yesterday evening. “Volunteers should prepare accordingly and be dressed appropriately. The city would like to thank volunteers who have helped residents and property owners at risk of flooding. More than 850 volunteers have pitched in this weekend.”

In West Carleton yesterday, some of those volunteers included some returning visitors. The Ottawa-based community group Langar for Hunger which “feeds the hungry, helps those in need and cares for our under-privileged neighbours” the organization says on its Facebook page.

A group of volunteers donated their time after last fall’s tornado and were back again in Constance Bay yesterday helping fill sandbags.

“Our Langar for Hunger team was at Constance Bay in Ottawa today, working alongside with Team Rubicon, OVSAR, City of Ottawa, other volunteers and local emergency services helping out filling sandbags and trying to save some local residences from losing their homes as the flood waters rise,” Langar for Hungar said in a statement last night. “Special thanks to MP Karen McCrimmon, the West Carleton Disaster Relief team and West Carleton Online and all the volunteers those who came out today.”

Below are more MVCA statements on other waters in the Mississippi Watershed: 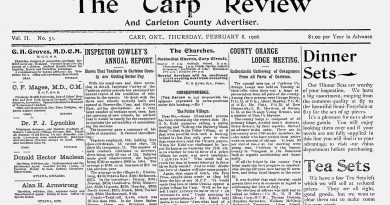