Duncan received the award from the Almonte General Hospital Fairview Manor Foundation Tuesday (Dec. 1) during a private celebration held at the hospital.  The award was presented by Bert’s widow Norma, as well as hospital president and CEO, Mary Wilson Trider, and foundation vice-chair, Julie Munro. The foundation board of directors decided to present the award on Giving Tuesday to celebrate Duncan’s years of support for the hospital and manor through volunteerism, donations and advocacy.

“Sophie and I would like to congratulate you on being recognized for the Bert McIntyre Memorial Award for volunteerism and thank you for your continued devotion to making a difference in the Almonte community,” wrote the Rt. Hon. Justin Trudeau in a personal letter sent to celebrate the award.

The Bert McIntyre Memorial Award was inaugurated and presented to Bert’s family last year to recognize his countless hours of dedication to raising funds for the hospital and manor, and for his personal philanthropy.  After a distinguished career as an OPP officer, Bert volunteered for 17 years with the foundation helping to raise thousands of dollars in support of quality health care close to home.

Duncan served on the foundation board from 2007 until 2015.  During that time, she was instrumental in helping to solicit thousands of dollars in support of the Quality Care for Life campaign.  Duncan continues to support many of the foundation’s events each year, including the annual walk/run and is proud to be a monthly donor.

Her Worship Mayor Christa Lowry sent a video tribute in which she said, “It’s hard to find someone who puts their whole heart into everything they do. You are one of them.  You inspire others to achieve greatness. On behalf of the Municipality of Mississippi Mills, thank you for all you have given and continue to give our community.”

Duncan was joined at the socially distanced ceremony by four of her five children.  The ceremony was also livestreamed on the foundation’s Facebook Page (@AGHFVM) and is now posted there too.  Congratulatory messages can be left for Duncan under the post. 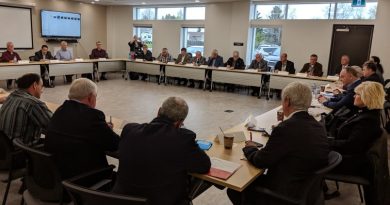 Carp in on pot shop lottery