WEST CARLETON – For the staff and customers of West Carleton’s two DEKA Home Building Centres, Saturday (May 9) was a small, busy step towards a return to normal.

It was the first day the Dunrobin and Carp building centres, both owned by James Roy, could open their doors since the provincial state of emergency was put in place on March 17 due to the COVID-19 pandemic.

While the two stores were open for curb-side pick-up during the first phase of the pandemic, customers and staff agreed it was good to be back. West Carleton Online visited both stores on their first day allowing customers back inside. In Dunrobin, the store was steady but not packed. In Carp, the lot was full of in-and-out traffic, but again, there was lots or room inside.

In Dunrobin, West Carleton Online overheard one customer say, “I’m glad you’re open,” to which the immediate reply from a nearby staff member was “you have no idea.”

“Fantastic,” Pisapio said about being back at work. “It’s been a big relief. It’s been a tough month-and-a-half.”

Pisapio would interrupt the interview to answer the phone a couple of times.

Pisapio said being able to be open during the pandemic providing curb-side pick-up and delivery was good for business, but a challenge for staff.

“You’d have to be a personal shopper,” he said. “It was taxing.”

“It was absolutely exhausting for everyone,” Oehring said. “Everyone really stepped up. It was like running a marathon every day. I’m sure everyone walked five or six kilometres every day filling out orders. The call volume was unbelievable.”

Oehring said the store even saw new customers during the pandemic.

“A lot of small contractors that used to shop in the city but came here because they were served faster,” Oehring said. “So that was good.”

Despite the workload, new customers and constraints incurred by the pandemic, the two stores were able to keep their stock full.

“It’s been difficult,” Pisapio said. “Especially for products for working around the house. It’s been a challenge, but we haven’t disappointed very many people.”

Pisapio says the store was able to stay stocked thanks to its weekly delivery and the help of local suppliers.

Opening day, Saturday was busy too Pisapio and Oehring report, but under control.

The staff spent the week before opening, preparing the stores so they were safe environments and followed provincial regulations.

“We put markings on the floor yesterday (Friday, May 8),” Pisapio said. “People are good. People are following the rules and are considerate. They get it now after grocery shopping the last few weeks.”

Despite the expected crowd, the Carp store did not have their full contingent of staff on hand for the big day.

“The yard is not as full as it could have been with people,” Pisapio said.

“It’s gone well,” Oehring said. “It could have been different. This is so much easier on the staff and a lot less stressful.” 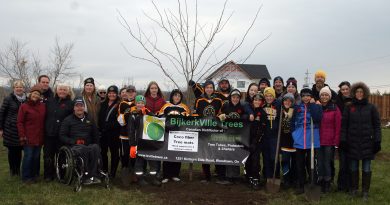