OTTAWA – The city will provide financial relief for those rebuilding after last week’s tornado heavily damaged around 53 habitable buildings in West Carleton.

Financial relief from fees, including demolition and building permits, is available for applications submitted due to storm damage. This relief is in addition to the property tax cancellation, reduction or refunds for which residents may be eligible.

City council also heard an update following Friday’s windstorm and tornado. Mayor Jim Watson thanked all first responders, staff from the city and Hydro Ottawa, and Councillors for the affected communities for their tremendous response through the recent emergency. City Manager Steve Kanellakos provided an overview of city efforts and ongoing activities.

Due to an increase in construction activity between 2015 and present, city council approved adding 12 full-time staff to Building Code Services. Revenues from building permits will cover the cost of the additional staff, who will help process applications in a timely fashion and enforce the Building Code Act.

The city ended the second quarter of 2018 with an operating surplus of $7.6 million, according to the quarterly budget update received by Council. Staff project an overall $14.4-million surplus by the end of the year, with surpluses in both tax- and rate-supported budgets.

The Kanata Highlands, a 60-hectare area along Huntmar Drive (click here for original West Carleton Online story), is now part of Ottawa’s urban area. Council approved an Official Plan amendment to expand the urban area farther west. The highlands will be developed in a way that protects sensitive environmental features, including a Blanding’s turtle habitat. The turtles are a protected species that use the site seasonally to cross from one habitat to another. Plans to develop the highlands as a residential subdivision include maintaining a corridor of lands – which will be owned by the city once the site is developed – for the turtles to cross. 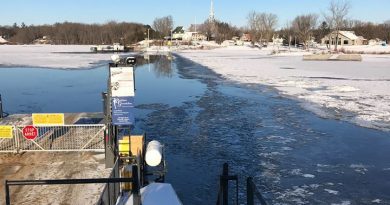 Quyon Ferry back at ‘er 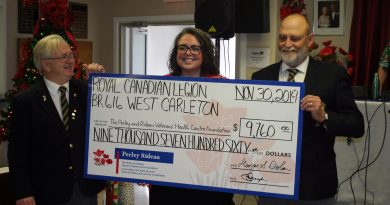 Veterans celebrate holidays at the Branch