Council approved a new work plan for the city’s planning team that will result in a new Official Plan by the end of March 2021.

In February, the Planning committee requested work on the Official Plan be completed six months sooner than the November 2021 date initially proposed by staff. To achieve the accelerated deadline, the city will hire additional staff to handle public consultations. That will free up city planning staff to concentrate on reviewing policy, writing the new Official Plan and preparing associated secondary plans and mapping.

Council approved funding to permanently staff the enhanced Temporary Traffic Calming Measures Program. Starting this year, Councillors will be able to implement gateway speed-limit signs and some permanent traffic-calming measures, such as speed humps and speed tables, median-narrowing islands and pedestrian-refuge islands, with funding from their annual $50,000 budget for temporary traffic-calming measures.

Council approved a streamlined study process for permanent traffic-calming plans. The new process will prioritize neighbourhood streets where small changes would have big impacts, allowing the City to address traffic issues in more neighbourhoods with a goal of making streets safer for all users. Council also approved design guidelines to ensure traffic-calming measures are applied consistently to retrofits of existing streets.

Council approved changes to the Road Activity By-law to mitigate the impact of road work on mobility and protect the city’s roads. Amendments to the by-law will come into effect on Sunday, July 1 and place responsibility on developers to resurface road cuts as part of construction. Changes include restricting road cuts into pavement less than three years old, expanding peak-hour restrictions on road work, increasing notification timelines and charging pavement degradation fees for all roads, with the revenue going towards road resurfacing projects.

The city’s partnership with Ottawa Sports and Entertainment Group shows continued growth as it has moved to full operations, according to the Lansdowne Partnership Plan report. With almost 3.9 million visitors to Lansdowne in 2017, partnership revenues grew by 36 per cent. Lansdowne became Canada’s first LEED Stage 3 Built Neighborhood project to receive Silver certification from the U.S. Green Building Council.

Council received the City of Ottawa Municipal Accessibility Plan,  which describes how the city prevents and removes barriers, and meets provincial requirements under the Accessibility for Ontarians with Disabilities Act. The city will consult with residents on the accessibility of its services later this year.

Council directed staff to retain five city-owned lands for development as affordable housing projects, based on a report from an interdepartmental working group that identified 18 properties, owned by all levels of government and located near transit stations, that could be developed into affordable housing.

Several zoning amendments were approved by council, including applications for a large retail development with a car wash and gas bar on Fernbank Road and a car dealership and high-rise apartment at Riverside Drive and Hunt Club Road.

Council approved allocating $400,000 to Habitat for Humanity Greater Ottawa to provide down payments to low to moderate income renters. They could purchase one of eight townhomes the organization is building at 6208 Jeanne D’Arc Boulevard, in the second phase of a 16-home affordable housing development. The renters will have an interest-free 35-year mortgage and their monthly mortgage payments will be based on their household income. If they sell the unit before the end of the 35-year period and the unit is not retained as affordable housing, the down payment will need to be repaid.

For more information on city programs and services, visit ottawa.ca or call 3-1-1 (TTY: 613-580-2401). You can also connect with us through Facebook, Twitter andInstagram. 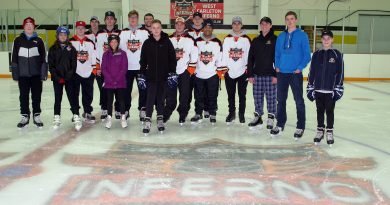 Inferno play for, skate with fans