MARATHON VILLAGE – Following the death of father to be Derrick Thompson, the West Carleton community and beyond have helped raise more than $40,000 for the mother-to-be and her child expected this August.

On June 30 a VIA Rail train collided with a truck at Barnsdale and Eagleson roads.

The driver, Marathon Village’s Thompson, 28, passed away at the scene.

“Derrick was a very hard worker and loved his job as a gas fitter,” the family wrote in Derrick’s obituary. “He looked forward to spending time with his family and friends and to play with his dogs Lexi and Lincoln. But his greatest joy in life was being a husband and best friend to the love of his life, Lisa. He was looking forward to their future and was so excited on becoming a new daddy. Those who knew Derrick, even just a little, lost a shining light in their lives.”

Friend Dana Millette launched a gofundme page in support of the widow.

“On June 30, a horrible accident took the life of Derrick Thompson,” Millette wrote on the fundraiser page. “Derrick is expecting his first born child in August with his best friend and wife, Lisa Thompson. We are asking for any type of donations big or small to help cover not only the unexpected expenses of such a sudden and tragic loss, but also to help the new mother with all the expenses that come along with having a baby.”

If you would like to make a donation to Lisa Thompson and her unborn child, click here. 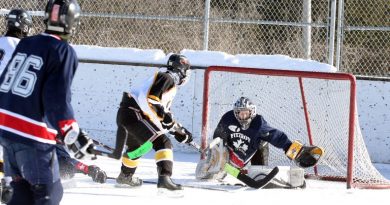