OTTAWA – The snow is still pretty thick, but City of Ottawa staff are already preparing for the spring thaw.

Emergency and Protective Services general manager Anthony Di Monte provided city council with an update today (March 15) on flood mitigation efforts along the Ottawa and Rideau River and other thawing considerations generally, including the localized pooling of water.

“As temperatures rise and the ice and snow begin to melt, flooding along the shores of the Ottawa and Rideau River is possible,” the report reads. “This is a natural process referred to as a freshet. You may recall in 2017 the City of Ottawa experienced above average amounts of rainfall during the peak of the freshet and, as a result, experienced a prolonged flooding event, which required a large-scale response from residents, city staff and community partners.”

Given this experience, the city established in 2018 a Spring Freshet Taskforce, which is actively preparing for the 2019 freshet. The Taskforce is comprised of staff from the following departments/services:

“Although current weather forecasts are favourable to a normal thaw in Ottawa, the risk of flooding ultimately depends on several factors, including the speed of the thaw and precipitation,” Di Monte said. “The taskforce continues to monitor water levels closely and has been mobilizing city assets accordingly.

Ice breaking operations are underway to enable smooth drainage of the Rideau River. The city is adjusting its supply of sand and sandbags based on current water levels, weather forecasts and feedback from the taskforce. As always, sand and sandbags will be available to residents who may experience flooding. A list of sand and sandbag locations can be found on ottawa.ca.

Public Information and media relations is implementing a communication plan that captures prevention, mitigation, preparedness, response and recovery activities prior to, during and after a flood. The city’s spring maintenance and flood control webpage has been updated on ottawa.ca. These are among the measures that will ensure the city is prepared for the 2019 spring freshet.

“The localized pooling of water is distinct from a freshet. Significant temperature fluctuations in the late winter and early spring months can result in saturated soil,” Di Monte said. “Pooling is common in Ottawa, and city staff have been actively opening catch basins to promote drainage.”

Residents can assist city staff by removing ice and debris from catch basins in front of their homes and can also mitigate the impact of flooding in their basements by: 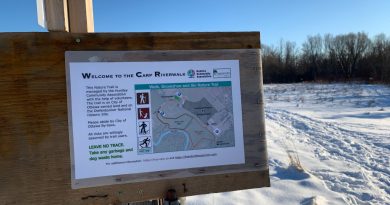