CARP – This year’s Rural Roots Theatre Company’s (RRTC) entry in to the Eastern Ontario Drama League One Act Play Festival will be chosen by the audience.

The cast and crew are hard at work perfecting their performances at the NorthWind Wireless Fibe Centre in Constance Bay, and that’s where RRTC members Helen Weeden and Marilyn Lilienthal sat down with West Carleton Online Aug. 8 to talk about the upcoming performance and the unique way the company is choosing this year’s festival entry.

Following each night’s performances, the audience members will fill out a ballot and vote on what performance they think should represent the RRTC at the One Act Play Festival being held in Kingston this November.

“This is a first,” Weeden said. “We hope the audience enjoys all the performance but looks at the whole picture. All our members want to compete at the festival.”

Weeden says it will be interesting to see what strikes the voters.

“You don’t know what they will look for,” she said. “The audience aren’t trained adjudicators. Simple things in a performance can be very distracting – time elements with the set or costumes. People tend to wander when things aren’t accurate.”

But Weeden admits there is a certain advantage to having the audience make the decision.

“We appreciate them doing this for us,” she said. “It’s an outside party that will make the decision and we can all live with that. It’s a taste of what a theatre festival is all about.”

Falling Apart is about a couple just leaving the lawyer’s office as they work through their divorce. Then they get stuck in the elevator on the way to the ground floor.

Blind Women’s Bluff is full of mystery. A blind woman is looking to sell an antique chair, but she made the mistake of putting her disability in the classified ad. A man who comes to look at the chair has ulterior motives for being there. But he might not be the only one with ulterior motives.

Safe at Home tells the story of a couple who mixes up their appointments. The husband ends up at the sex therapist while the wife shows up at the baseball coach’s office. Do they even notice they are at the wrong spot?

While the RRTC’s home base and theatre is the NorthWind Centre, they relish the opportunity to share their talents and love of theatre and this isn’t the first time they have performed in Carp.

One of a few performances in the village occurred five years ago when the company produced the Fairground Follies, a tribute to the Carp Fair’s 150th anniversary based on a script written by Weeden.

Weeden says the company won’t wait to find out which performance will represent the RRTC at the festival.

“We’re going to have a cast party Saturday night and we’ll count the votes that night,” she said. 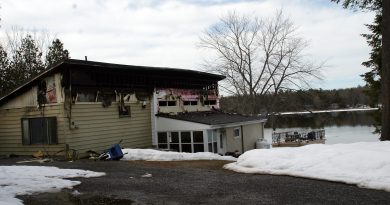