CITY HALL – A motion forwarded by Coun. Eli El-Chantiry at today’s (Feb. 10) council meeting will infuse more than $500,000 in to improved rural Internet service and roads in West Carleton.

Last week (Feb. 2), the city’s Finance and Economic Development committee (FEDCO) discussed the issue of releasing its three re-purchase options for the Carp Airport recommending council waive the city’s option in exchange for a cash infusion of about $4.4 million.

A few days after that (Feb. 5), the Agriculture and Rural Affairs committee, chaired by Coun. Eli El-Chantiry, discussed the lack of reliable, affordable rural Internet service in Ottawa.

Today, the councillor tabled both issues in to two motions both approved by council.

While council approved the motion to divest itself of its role in the Carp Airport, it also approved El-Chantiry’s, seconded by Mayor Jim Watson, amendments.

The motion had several moving parts to it.

If approved, as part of divesting itself from the airport, WCD will pay the city $4.408 million with the terms including an initial payment of $700,000 upon signing the agreement. WCD then has 10 years to pay the remaining $3.7 million plus interest.

Staff will be directed by council to allocate the initial $700,000 payment to several rural projects including Internet service.

$265,000 will be invested “in rural broadband and economic development” in several projects.

$20,000 is earmarked for Just Food to support buy local initiatives and farmers’ markets.

$75,000 will be invested in carbon capture technology at the Ottawa Smart Farm project, launched last May.

$80,000 will pay for a one-year temporary position to support connectivity expansion within Ottawa and the Smart Farm project, with $40,000 in supplemental compensation funding from Right of Way, Heritage and Urban Design revenues.

$40,000 will be allocated as part of a forthcoming information report (as mentioned in the above-linked story) to council regarding connectivity.

The remaining WCD funds will be divided in two.

$260,000 of the WCD payment will go to road renewal and resurfacing in Ward 5. $175,000 will be deposited in to the city’s Housing Reserve as per the city’s Affordable Housing Land and Funding Policy.

Council will direct staff to waive the fees for all road cut permits applied for in the rural area for all “ISPs and their agents undertaking the installation of telecommunication infrastructure.”

City staff says a permit goes for about $500 and the city will lose out on “approximately $10,000 in revenue based on metrics from the last few years.”

“It’s a small gesture, but meaningful in the rural area,” staff said.

El-Chantiry says this agreement “will take us for the next 20 years,” in terms of the operation of the airport, and will provide some funding for rural Internet service.

“We need a little bit of funding to support the Rural Ontario Municipal Association’s recommendations,” El-Chantiry said. “We’ve asked our staff to work with all of the small carriers. We need some help. I don’t think Internet service is just a West Carleton issue, it’s across all rural areas of the city.”

Eighty per cent of the City of Ottawa is classified as rural.

Mayor Watson is also supportive of the plan. 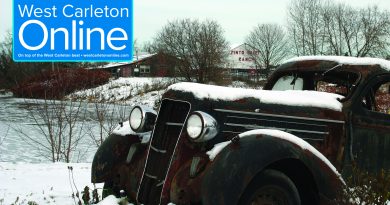 Give the gift of community