Ted was the dear, beloved husband of Carol (nee Lavender). He was born May 21, 1945 in Ottawa, eldest child of the late Edward and Dorothy (Dorrie). Ted was the inspiring father to Jake (Caitlin Morris) and Sullivan (Kimberly Eady), all of Ottawa . Ted was the loving brother to Pam (Paull Barkell); Jennifer (Michael Schrier); Susan (Fred Argument); Valerie (Glenn Egan) and brother-in-law to Kim Lavender (Steve Jones); Mark Lavender (Noreen Kemp); Paul Lavender (Gaetane Lauzon) and Penny Kearns (Wayne).  Special son-in-law of Ivan Lavender.  Ted will be remembered by many nieces and nephews.

Ted was a well known jeweller and craftsman in Ottawa for 47 plus years; a founding member of 85 Clarence and Second Storey; ending up the owner of DEVINE in the Chateau Laurier. He was also an active member in his community (President FHCA, baseball coach) and a longstanding member in his cherished Jovial Fish and Game Club.

Friends may visit with the family at the Carp Chapel of Tubman Funeral Homes, 315 Rivington St., Carp, on Sunday, October 7th from 1-3pm.

Ted’s humour and clever wit will be missed by many.

Nominations are open for the 2018 Immigrant Entrepreneur Awards 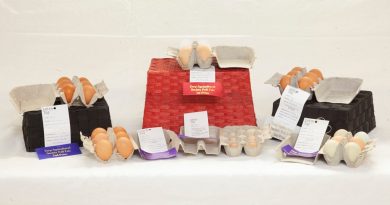 Carp Fair Showcase results are in